Q: Is it okay to eat dairy when I have a cold? A: Are you a baby calf? 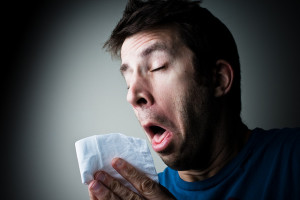 Every season brings its share of challenges to our immune system. The incidence of viral infections associated with respiratory symptoms is relatively low in the summertime but once the cold weather sets in, the challenge begins. Being indoors increases the probability of transmission from one person to another because of the close quarters and increased frequency and duration of contact between one person and another.

Put hundreds of kids in close proximity and before you know it bodily secretions are shared with everyone in your community. Add that to the December hangover, and you end up with no chance of escaping exposure to viruses that cause the common cold.

Some people go to great lengths to avoid infections during peak season – taking supplements, avoiding contact with potentially contaminated objects and people, increasing sleep, reducing stress, and bundling up when they go outside.

Taking supplements has been shown to reduce the severity and duration of a cold and several supplements can reduce the risk for infection. Avoiding physical contact with people who carry the virus and objects that are contaminated with virus has been shown to reduce the risk of infection and transmission. A good night’s sleep is completely necessary to keep the immune system tuned up and distress compromises every function in the body.

Traditional wisdom says that staying warm and covered during cold, wet days keeps colds away. We know that the effectiveness of our immune system decreases when our body temperature drops.

Pretty much everyone knows about the negative effects of dairy on the immune system don’t they?

What really happens when we eat dairy and does it increase symptoms associated with inflammation in the body?

In medical school we were taught to avoid dairy at all costs and to inform our patients to do the same. But I learned really quickly that with alternative medicine, there are practices and beliefs carried on as tradition that have very little scientific backing. This by no means invalidates those practices, but in many cases, science hasn’t caught up with what physicians observe in interactions with patients.

I have, without a doubt, seen the problems associated with dairy consumption and if I were to pick one food that I’ve noticed that triggers the most symptoms, it would be dairy. I try to avoid consuming it every day because of the symptoms it produces in my body, post-nasal drip, nasal congestion, but I do enjoy my share and I tell my patients to experiment with it and figure out where their threshold for symptoms is.

Why is dairy potentially a problem food for many people?

Well, it has two proteins casein, and whey, and a sugar called lactose that we know are difficult to digest.

Casein is the most problematic protein. It is large and complex. Baby calves are make an enzyme called Rennet which coagulates the milk and breaks the casein into smaller pieces.

But guess what? We aren’t cows!

We don’t make Rennet, we make hydrochloric acid (HCl),  and protease, the enzyme, that breaks down protein. Rennet is effective in digesting casein but  many people make very little HCL and protease which makes it impossible to completely digest those proteins. So what happens when the proteins aren’t digested properly? They travel further down the intestines than they are supposed to and as a result, generate inflammation in the gut that triggers a systemic release of inflammatory compounds called cytokines. This means that when you generate an immune response in the gut, you can potentially develop symptoms in the nasal mucosa of the respiratory system.

Whey is also a protein found in dairy and a byproduct of rennet’s influence on milk. Whey protein is not as large or complex as casein and is more easily digested and therefore not as much of a problem for most people.

Up to 75% of the world population and 25% of those in the US have lactose intolerance.  Lactose intolerance is a condition in which individuals cannot digest and break down the lactose molecule. As a result, they develop, bloating and gas, cramping, and in some cases, diarrhea. Individuals who consume dairy and develop symptoms of lactose intolerance experience an inflammatory reaction in the gut, but systemic symptoms as a result of that have yet to be discovered.

So what do the studies say?

In 1990, Pinnock et al. carried out a study and determined that milk consumption at several levels had no effect on mucous production in individuals who were concomitantly infected with Rhinovirus, one of the viruses that causes the common cold. Although, there were subjects who experienced more congestion and coughs as a result of milk consumption. If you read the abstract of this study there is noticeable sarcasm in a statement that suggests that people who ‘believed they had a problem with milk” reported greater symptoms than those who didn’t. I’ll tip my cap to these scientists for doing this study but the design is seriously flawed and it is really difficult to measure subjective symptoms without introducing bias, especially with the small number of study subjects.

Wuthrich et al concluded in a meta-analysis that there is no association between consumption of milk and the production of mucous or occurrence of asthma. I would never argue that dairy consumption is causative for asthma, but it only takes a small brain to know that you wouldn’t want to consume a dairy product that is known to cause an inflammatory response in an individual who already has an inflammatory lung condition. I have seen people with asthma radically improve when they quit dairy.

What about testing for dairy allergy or sensitivity?

This is a bigger subject than I have time for in this article but I’ll give you the cliffnotes. There are at least two types of immune responses to proteins, one is a true allergy where you have what is called an IgE reaction, and the other is a sensitivity, which stimulates an IgG reaction in the body. The IgE reaction (allergy) is usually permanent and people who develop this have a stronger response to the offending protein. There is also an IgG reaction in the body that occurs as a result of poor digestion and inflammatory response in the gut as I mentioned above. This reaction is temporary if the individual discontinues consumption of the protein for 3-6 weeks.

So who should you believe about consuming dairy? I don’t want to suggest that I have the all of the answers because I don’t. The scientific basis for disproving all of the nutjobs that think dairy causes respiratory congestion is woefully inadequate. We know that lactose is a major digestive issue for many people because the science has proven that. The studies have not gone a step further to prove that the inflammation from lactose consumption in individuals who cannot digest lactose develop systemic inflammation and resulting respiratory inflammation.